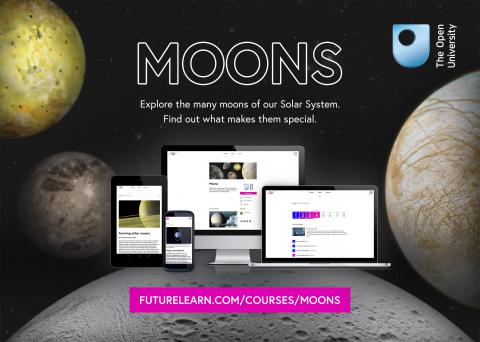 we’re excited that 'Moons' a new course from The Open University starts on the FutureLearn platform on Monday 17th March. The course is suitable for anyone with an interest in geology, astronomy or planets and does not require any previous experience of studying these subjects. The course covers many aspects of the moons of the Solar System and in weeks five and six of the eight, students get access to rocks returned to Earth by the Apollo astronauts. The same rocks are available on this site along with many other Moon rocks.

What’s in the Moons course:
Week 1.  Introduction to moons, the Solar System, orbits and tidal heating.
Week 2. Composition of moons and the importance of impacts and cratering in forming the surface of moons.
Week 3. Volcanism and cryovolcanism, some small moons, and the Moons Trumps game.
Week 4. The Earth’s own Moon. The race to the Moon and bringing samples back to Earth.
Week 5. Formation of the Moon, its surface, and the study of Moon rocks.
Week 6. The story of water on the Moon. The dry Moon-wet Moon debate and implications of the different forms of water.
Week 7. Exploring moons, in particular missions to the outer Solar System.
Week 8. The future of exploration, and the debate over habitable places in our Solar System including the potential for life on icy moons.

Find it all at FutureLearn

< Back to news listing