The Apollo 11 samples create an iconic collection since they were the first rocks collected by humankind that were returned to Earth from another solar system body. The Apollo 11 team collected and returned 22 kg of rock and soil samples.

Apollo 11 launched from Cape Kennedy on July 16, 1969. An estimated 530 million people watched Armstrong's televised image and heard his voice describe the event as he took "...one small step for a man, one giant leap for mankind" on July 20, 1969. 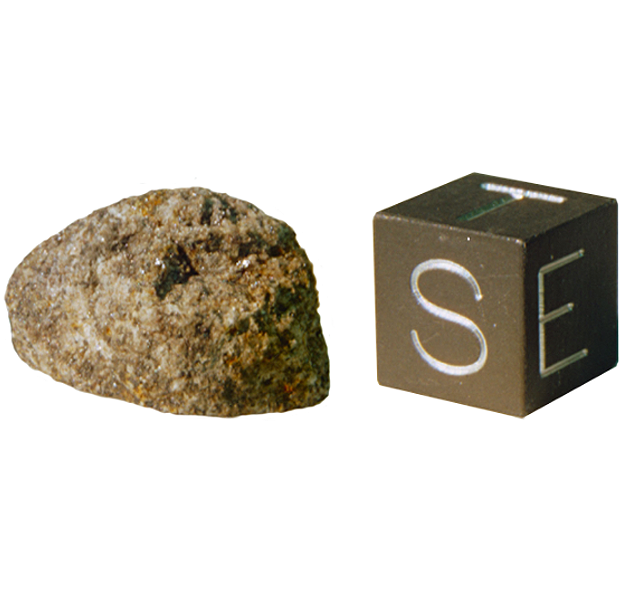 10029 - Ilmenite basalt
These digital assets are available under a Creative Commons Attribution-NonCommercial-ShareAlike 2.0 Licence

Sample 10029 is a small 5 gram sample of lunar basalt that appears to have rusted (cube is 1cm across). It crystallised 3.9 billion years ago and has been exposed at the surface of the Moon for 130 million years. This sample was the subject of some controversy since the 'rust' implies the presence of water on the Moon. However, later studies appear to show that the sample, which was returned in air, rusted only after it was returned in the moist atmosphere of Earth.

In thin section, the sample has an ophitic texture, a term that is used to describe the blocky grains of ilmenite (black in transmitted light), minor olivine, and plagioclase feldspar laths all enclosed in much coarser-grained pyroxene. The rusting is seen in thin section as brown 'staining' surrounding the iron-rich minerals troilite and metallic iron which are easily identified in reflected light. The "rust" has the composition of akaganeite - a hydrated ferric iron oxide.

In Place
In Time
Accuracy:
Location precision:
Good
Timescale:
Not known
Ma = Millions of years ago
In Focus
Collection:
Apollo 11