The Apollo 15 landing site was in the Apennine Highlands, and close to Hadley Rille - a long, narrow winding valley. Approximately 76 kg of lunar material including soil, rock, core-tube and deep-core samples were returned to Earth.

This mission was the first flight of the Lunar Roving Vehicle which allowed the astronauts to venture further from the Lunar Module than in previous missions. During three periods of extravehicular activity, or EVA, on July 31st, and August 1st and 2nd, Scott and Irwin completed a record 18 hours, 37 minutes of exploration, travelled 17.5 miles in the first car that humans had ever driven on the Moon. 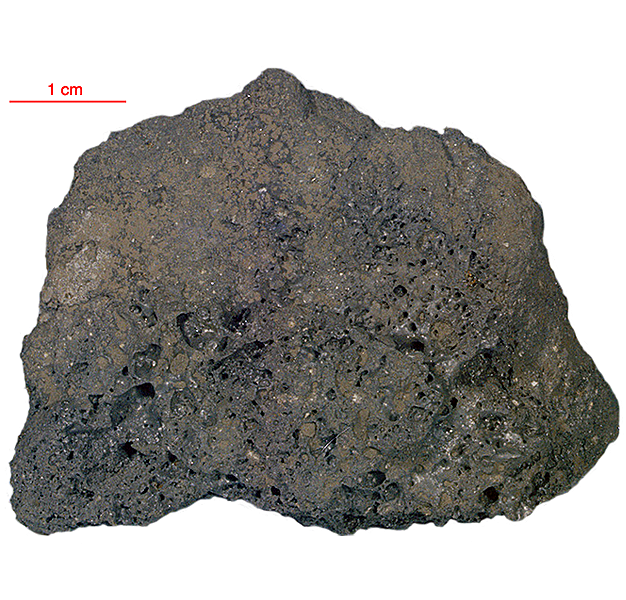 15028 (5) Regolith Breccia
These digital assets are available under a Creative Commons Attribution-NonCommercial-ShareAlike 2.0 Licence

15027 and 15028 are glass-coated breccias found together near the lunar module.  Pale green volcanic glass, some fragmental and some forming subrounded or spherical masses are most obvious in thin section. Many mineral fragments and a few basaltic clasts are also present. Veinlets of impact melt criss-cross the sample.

The sample weighed 51 grams before analysis. It has not been dated.

In Place
In Time
Accuracy:
Timescale:
Not known
Ma = Millions of years ago
In Focus
Collection:
Apollo 15