The Apollo 16 landing site is in the region around Descartes crater in the lunar highlands.

The landing spot was chosen to allow the astronauts to gather geologically older lunar material than the samples obtained in the first four landings, which were in or near lunar maria (Descartes and Cayley Formations). 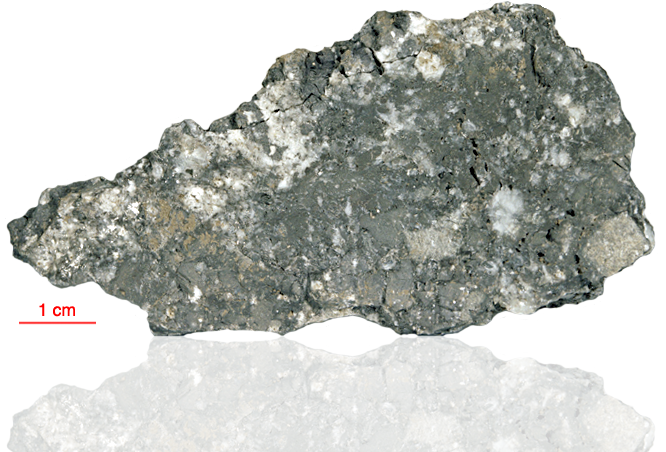 60115 (14) Polymict Breccia
These digital assets are available under a Creative Commons Attribution-NonCommercial-ShareAlike 2.0 Licence

60115 is a black and white breccia with light matrix. It is clast-rich with distinct clast boundaries and contains relics of shocked anorthosite, grading into swirly glass, are abundant. Glass penetrates some of the dark clasts and aphanitic impact melts are present. Charles Meyer aptly summarises the sample in his Lunar Compendium entry - “ It’s a real mess”.

The sample weighed 132.5 grams before analysis and has not been dated.

Discolouration of the thin section mounting resin shows as yellow patches throughout the section.

In Place
In Time
Accuracy:
Timescale:
Not known
Ma = Millions of years ago
In Focus
Collection:
Apollo 16