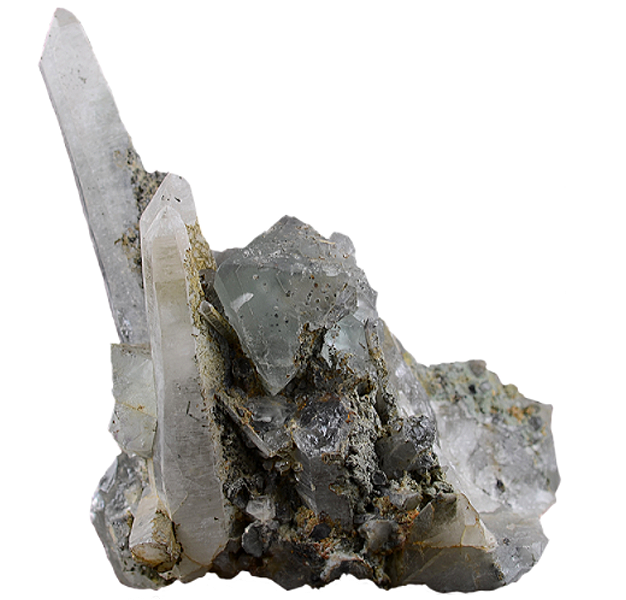 Fluorite and quartz
These digital assets are available under a Creative Commons Attribution-NonCommercial-ShareAlike 2.0 Licence

Quartz (silicon dioxide) is a common mineral found in veins alongside the valuable ores.  Such commercially unimportant minerals are often termed gangue.

This specimen shows tall prismatic quartz crystals, along with an octahedral-shaped crystal of fluorite (calcium fluoride). It is part of the collection of minerals compiled by Cornish gentleman–collector Philip Rashleigh in the 18th century. It is illustrated in volume 1 of his publication Specimens of British Minerals and is described as:

"A double four sided pyramid of fluor, joined base to base, very large, semi-transparent, and of a light green colour, with six sided crystals of quartz. From Poldice, in Gwennap."

Poldice was active in the 16th century, making it one of the earliest recorded mines in Cornwall. Edward D. Clarke (later to become Professor of Mineralogy at Cambridge) descended Poldice on his tour of Cornwall in 1791:

"At about eighty fathoms we came to a vein of copper ore …. hardly room to move their bodies, in sulphurous air, wet to the skin and buried in solid rock …. pecking out the hard ore by the glimmering of a small candle."