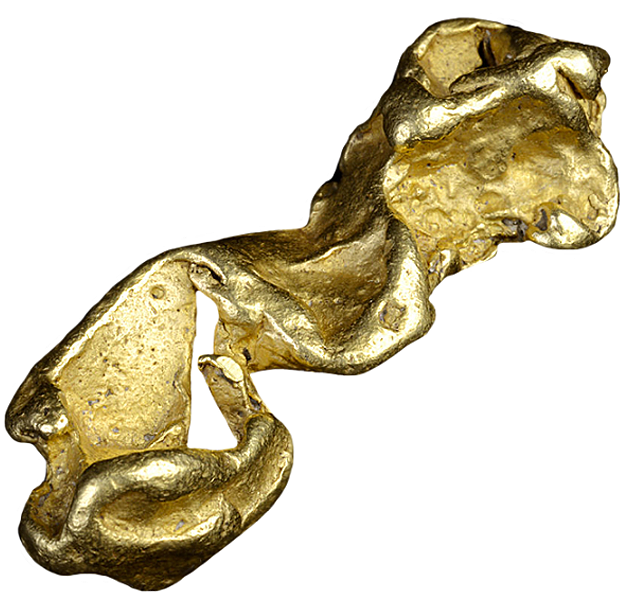 Gold
These digital assets are available under a Creative Commons Attribution-NonCommercial-ShareAlike 2.0 Licence

Gold is a dense, unreactive metal, which does not naturally form compounds with many other elements. As a result, it is usually found in its elemental or native state.  It occurs in veins in rocks or as weathered-out grains that have become concentrated in river-based sediments called ‘placers’, that are rich in heavy minerals. Gold has been recorded from many localities within Cornwall. Most are placer deposits that have been worked by tin-streamers.

This is the largest nugget of Cornish gold yet found.  It was reported in the Royal Cornwall Gazette, February 1808:

"A beautiful specimen of virgin gold, lately found in a tin stream-work in Cornwall, is now in the possession of Mr Wills, silver-smith of Truro.  It is about the length and thickness of a lady’s finger, though less regularly formed, and weighs above two ounces.  Its intrinsic value is equal to nine guineas; but, as a specimen, it is invaluable…"

Shortly afterwards the newspaper reported that the specimen had been added to the beautiful and scientific collection of Philip Rashleigh.  It is recorded there as gold specimen number 112, and is the last gold specimen listed in his catalogue: