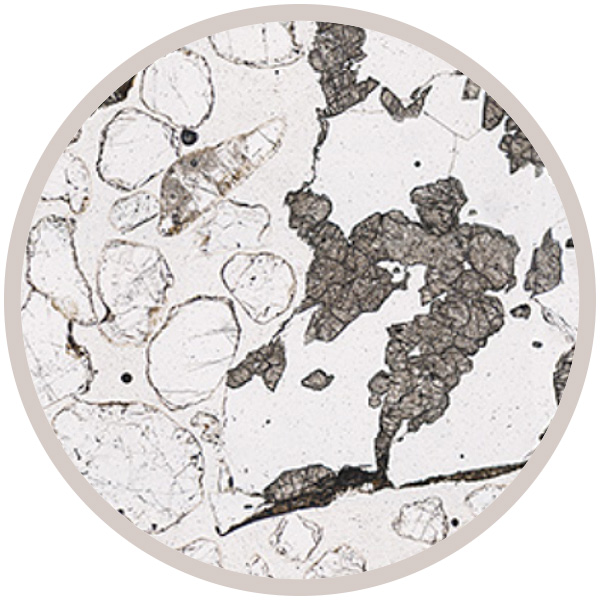 We would like to thank the following for the use of this sample:
Southern Illinois

The first specimen of this basaltic shergotitte (achondrite) was purchased in Erfoud, Morocco (in 2005), but the strewn field is thought to be in Algeria. There may be over 100 pieces, estimated to total 1.6 kg. Many have a fresh fusion crust (partial), a basaltic texture and distinctive black glass pockets and veins.

NWA 2975 is medium-grained and consists of pale green prismatic pyroxene (augite and pigeonite) intergrown with white/colourless plagioclase feldspar that has been entirely converted to maskelynite due to shock metamorphism. Minor constituents include the phosphate merrillite and three opaque species (ilmenite, pyrrhotite and ulvospinel). The Mn/Fe ratio of the pyroxene is comparable to other samples of Martian origin.

This description is based on the work of NASA scientist Charles Meyer - compiler of The Mars Meteorite Compendium, and scientists from the universities of Northern Arizona and Washington.

Our sample has a small area of fusion crust and has been mounted in a mixture of mounting medium and sand.