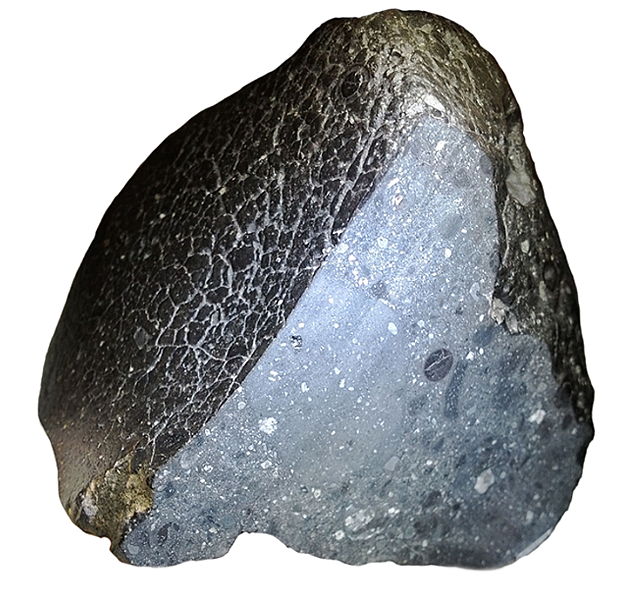 We would like to thank the following for the use of this sample:
The Open University

NWA 7034 (otherwise known as Black Beauty) is unique from other martian meteorites and was found in the Sahara Desert in 2011. It is 2 billion years old. Its martian origin was confirmed by pyroxene analyses (Fe/Mn ratios)and noble gas measurements that match measurements of the martian atmosphere. This meteorite is a breccia with a basaltic bulk composition and initially classified as a porphyritic basaltic monomict breccia clasts containing a wide variety of textures and include gabbros, quenched melts, and oxide rich reaction spherules. Other portions of the breccia contain plutonic lithic clasts such as monzonites and norites, basalts, and impact melt clasts. This is a very heterogeneous breccia!

Initial studies of NWA 7034 determined that the meteorite's bulk composition coincides with the composition of the average martian crust determined from mission data. This bulk composition also matches some of the rocks and soils measured in Gusev Crater by the Mars Exploration Rovers (MER) and in fact, this meteorite represents the strongest link between a martian meteorite and the geochemistry of the martian surface determined by remote sensing.

This virtual microscope is unusual in containing a three element combination x-ray map, where P, Mg and Al have been assigned to the red, green and blue channels respectively. Using this map it is possible to easily see the normally difficult to see phosphate minerals. Thanks to Santos et al. for permission to include the map here.